Finland has three multi-purpose arenas with the capacity of over…

The Parede FC (PFC) is a club in Portugal with…

Easy LED – PICA is an energy-efficient luminaire for many…

Finland has three multi-purpose arenas with the capacity of over 10,000 seats. Nokia Arena in Tampere, Helsinki Halli in Helsinki and Gatorade Center in Turku are arenas suitable for big events. They each have their precise and absolute requirements for lighting, especially when it comes to sports events. The lighting is determined according to the needs of television broadcasting and the visibility needed at the arena. The Finnish company Easy LED Oy has designed and implemented the lighting for all three of the multi-purpose arenas.

Nokia Arena was the latest project

The newest multi-purpose arena in Finland, Nokia Arena, has been completed. It is located on a deck above the railways, in the urban centre of Tampere. In the lighting project, the project supervisor SRV Rakennus Oy was Easy LED Oy’s client. Ramboll Finland Oy was responsible for the project’s technical planning, including electricity and lighting design. Nokia Arena has been a unique challenge for the designers, and this applies to lighting as well.

“The tendering process and the negotiations were long and challenging; they involved several luminaire manufacturers. Easy LED Oy was elected the best option, in regards to both quality and finance. Their experience in Helsinki Halli’s NHL- and KHL-quality lighting influenced the decision greatly. One of the developer’s requirements was to have lighting that is as high-quality as in NHL, IIHF, FIBA and FIVB. This was achieved with one lighting solution by using the DMX control technology. Cooperation with Easy LED has been effortless since the beginning,” says Markus Tretjakov, Project Manager at Ramboll Finland Oy.

Nokia Arena in Tampere will also act as the main venue for the 2022 Ice Hockey World Championship. Half of the tournament’s preliminary round, two of the quarterfinals, the semifinals and the finals will all be played in Tampere. The rest of the games will be played in Helsinki icehall.

Today, the only option available for new sports facilities is LED lighting. But just any LED light will not do. For example, telecasting requires that the lighting is completely flicker-free and adequately powerful as the slow-motion function of high-speed cameras needs to be considered. The puck is clearly visible and the colours remain realistic. It is also important for the players that there is enough light but that it does not dazzle them. 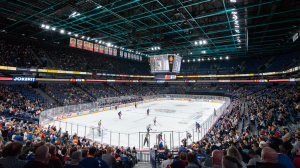 “The lighting specifications of the international leagues NHL and KHL are the most demanding and the required amount of light is high as the TV broadcasts and instant replays need to be considered. For example, KHL requires that the camera lights have brightness over 2,500 lux. The lighting in Helsinki Halli is according to the KHL requirements and in Nokia Arena it is according to NHL requirements. The lighting in Gatorade Center has also been replaced this year to be higher than the recommended level the Finnish Ice Hockey Association has determined for the league games,” says Ilkka Kartio, the CEO of Easy LED Oy.

“In the case of the arena in Tampere, we got to design the lighting from the start. We replaced the Helsinki Halli’s lighting in 2018 and the Gatorade lighting in 2021. The metal-halide lamps in both arenas were replaced with reliable LED lights with which you do not need to worry about adjusting or replacing the light bulbs.” 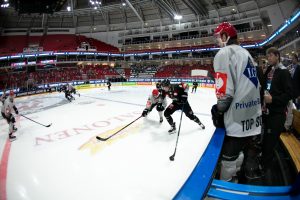 “The fact that Easy LED has been trusted in all the multi-purpose arenas in Finland makes me humble. I believe one of our advantages to be that we can support the project from start to finish; with planning, manufacturing, implementation, programming and maintenance. We can use a secure remote connection to review the situation and, if necessary, take measures in a cost-efficient manner,” Kartio says.

The lighting system must be built so that the lights can be controlled and programmed individually, which means that the lighting can adapt to all kinds of purposes such as different sports, exercises, concerts, maintenance, and situations in which the arena is not in use. With the digital DMX control (Digital MultipleX) lighting control users can adjust the lighting from several control points. This is useful in a multi-purpose arena where events can vary several times during a single week.

“The DMX-RDM control makes it possible to control the game lights with the same light desk as the show lights. DMX also enables extremely fast lighting reactions, including the strobe effect. This means that the viewer experience is improved.”

Of course, the lighting in each of the multi-purpose arenas is also suitable for other sports. For example, in Tampere the main sport is ice hockey, but the lighting has been designed so that it can adapt to the requirements of basketball (FIBA) and volleyball.

Easy LED is a Finnish company specialising in the design, manufacture and implementation of LED lighting systems. Easy LED has a long-standing experience in different kinds of sports-related LED lighting, both in Finland and elsewhere in Europe. Large multi-purpose arenas trust the BUBO® LED lighting system Easy LED has developed for stadium and arena use. BUBO® is completely flicker-free and glareless, and according to Ilkka Kartio, its local content is exceptionally high.

“BUBO® represents the Finnish engineering competence, including the electronics. All the mechanical parts and the aluminium frame have been manufactured in Finland.”

“We have planned and implemented lighting solutions for different kinds of sports-related venues in Germany and Estonia, among others. At the moment, we are also planning a few arenas appropriate for the top leagues.”

Subscribe to our electronic newsletter and receive up-to-date information on our new products and services. You will also receive info about events where you can come and meet us. We send out newsletters about four times per year. The subscription in free and can be cancelled at any time using the link provided at the end of the letter.

Something went wrong. Please check your entries and try again.